All table saws share the same basic anatomy: They all have a base, a table and extension wings, rails and a rip fence, a motor, trunnions, gearing to raise and tilt the blade, and an arbor and arbor assembly. But the huskiness and durability of these components vary depending on the quality of the saw in general, and on the intended use of the saw. In this article, we'll cover the basics of table saw terminology, and help you understand the features that really matter when you're shopping for a new saw.

The base houses the working parts of the saw, including the trunnions, the arbor assembly, the sector gears, and sometimes the motor. On some saws, the base is a "cabinet" type, meaning that a fully enclosed base extends all the way to the floor. Other saws have an open base, meaning that the base consists of an open metal box that surrounds the internal working parts of the saw. Open base saws have legs that extend from the bottom of the base to the floor. Recently, a few "hybrid" saws that combine the features of a cabinet base and an open base have appeared on the market. These saws have legs, but the base is enclosed on all sides to facilitate dust collection and limit noise.

The SawStop Contractor Table Saw pictured above is an open based saw. The motor is mounted on the back of the saw and the bottom of the base is open. SawStop saws also feature a revolutionary safety system that greatly reduces the chance of injury from contact with the saw blade (learn more).

The Table and Extension Wings

The table and extensions play an extremely important role in the overall performance of the saw. The table needs to be reliably flat and durable to properly support the workpiece being cut. Cast iron is the material of choice for the table and extensions. On a quality saw, the table is made using state-of-the-art foundry methods and is precision ground to flatness in the .0005" tolerance range. Table extension wings bolt on to the right and left sides of the table and increase the surface area of the saw to help support wide stock and sheet materials. On a heavy duty stationary saw, the extensions are usually cast iron, while on smaller saws, they may be made of lighter stamped steel or the lighter "webbed" style of cast iron. One drawback of lighter-weight table extensions is that they - of course - have less mass, and the overall mass of the saw is what soaks up the vibration crated by the motor and other moving parts. The added mass of heavy cast iron extension wings decreases vibration, which in turn helps the saw stay in calibration, and, incidentally, helps it stay firmly planted on the shop floor. On less expensive saws, extensions with inferior grinding or wings made of stamped metal can also compromise the overall flatness of the table surface. 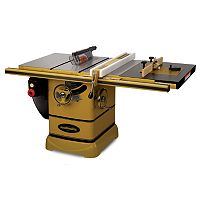 Cabinet table saws, like the Powermatic PM2000 pictured here, still set the standard for durability and performance. But depending on you needs, there are other options to consider. For more on choosing the best saw for your woodworking style, read "The Right Table Saw for Your Shop."

The Rip Fence and Rails

The rip fence guides the wood as it is being ripped (cut along it's length) and can be positioned to any width of cut within the saw's range. The fence rides on fence rails attached to the front and rear edge of the table. Ideally, the system keeps the fence perfectly parallel to the plane of the blade, regardless of where the fence is positioned. The quality and accuracy of fence systems, however, varies greatly across the spectrum. The quality of a table saw's fence system is an extremely important consideration: A poorly designed or inaccurate fence greatly diminishes the quality and accuracy of the cut, and can be a source of significant frustration. For saws in the price range of most hobbyists, the famous Biesemeyer T-square fence design sets the standard. Fence systems like the Jet XACTA and Powermatic's Accu-Fence are the norm on professional-class stationary saws and, happily, are also available on many smaller and less costly Jet and Powermatic models. 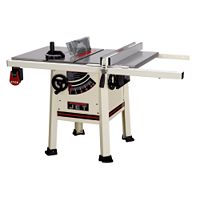 The fence systems offered with better-quality contractor and hybrid saws, like the Jet ProShop Table Saw pictured above, are patterned after the famous Biesemeyer design, bringing the accuracy and reliability of a professional-class fence system to lighter-weight, more affordable saws.

Most table saws use the miter gauge and miter slot system to allow for crosscutting. A miter gauge consists of a cast metal protractor head attached to a length of metal bar. The bar rides in corresponding "miter slot" in the table saw's surface. Protractor on the "no frills" miter gauges that come with most table saws can be set to crosscut stock at any angle between 90 and 30 degrees and, if well made, do a serviceable job with most "routine" crosscutting. One of the more useful add-ons for just about any table saw is either an upgraded system offered by the manufacturer or an aftermarket miter gauge or crosscutting sled. These tools provide, in various combinations, repeatable incremental angle positioning, longer fences, stop blocks and other advanced features that can come in handy in projects that call for precision crosscutting.

The Motor, Trunnions, and Arbor Assembly

The motor, trunnions, arbor assembly, and gearing make up the essential mechanical components of the saw. The quality and robustness of these components vary considerably from saw to saw and can greatly impact the durability of the saw and its capacity for cutting heavy stock and its ability to stay in adjustment and hold settings. Most table saws - other than "jobsite" and bench top models - are equipped with induction type motors in the 1 - 5 HP range. On better quality saws, you'll find a "totally enclosed fan cooled" (TEFC) induction motor, which makes sense, because a TEFC motor is sealed against dust and other contaminants (a significant advantage in a woodshop) and is designed for continuous duty. Saws specifically designed for hobbyists and home use are usually outfitted with motors under 3 HP and can be operated on standard 110 volt residential circuitry. In general, motors in this class are powerful enough for routine cutting of sheet goods and hardwoods up to 1" thick. Professional class saws, on the other hand, have motors in the 3- 5 HP range and require a 220 volt power supply. Motors in this category are designed to stand up to hours and hours of continuous duty, and have enough power to cut even thick, heavy hardwood stock without bogging down. The arbor assembly is made up of the arbor and the sector gear for raising and lowering the blade. The arbor is the shaft that holds the blade. On all American stationary saws that use a 10" blade, the arbor is 5/8" in diameter where the blade is attached. On some larger and higher quality saws, the arbor is larger in diameter through the bearings to allow for more substantial bearings, and is turned down to 5/8" to accommodate the blade. The sector gear is an arc shaped gear that operates in conjunction with a worm gear attached to an adjustment wheel to raise and lower the blade. The gearing on better saws includes an adjustment mechanism to take up slack in the gearing and limit backlash. The front and rear trunnions - along with the yoke, which joins the two - are what hold the motor and arbor assembly in place. The trunnions are of interest because they are what hold the blade in alignment with the rip fence and miter slot, and also because they play a role in absorbing vibration form the motor and blade and transferring it to the mass of the saw's base and table. Trunnions with a "wide stance" (trunnions that span most of the width of the base have a wide stance) tend to improve the stability of the arbor assembly. The general rule of thumb is: the better the saw, the more substantial the trunnions. A final and particularly important consideration is whether the trunnions mount to the base of the saw or the underside of the table. Trunnions that mount to the base (the standard on professional-class saws) make aligning the blade with the miter slot and fence much easier: The motor, arbor assembly, trunnions and base stay bolted together as a single unit while the table is brought into alignment with the blade, rather than awkward prospect of having to loosen the trunnions assembly from the bottom of the table and bring it into alignment with the table top.

Putting It All Together

A solid understanding of a table saw terminology is an important step in choosing the best machine for your shop or getting the most out of the saw you own. But don't stop there - we advise gathering as much information as you can. To learn more about the features to look for in a new saw, how to improve its performance and how to keep it running in top condition, read on through our collection of table saw articles. Then, for a more in-depth education, pick up a table saw book or DVD. Written by experts in the field, books like Fine Woodworking's Mastering Your Table Saw, are chock full of detailed information on table saw mechanics, maintenance, adjustment and operation.