Store Locator
Shop
Account
Help
Classes
Projects
$269.99 Each
Additional Shipping and Handling Charge: $25
In stock
See how you can get free standard shipping.

Skip to the beginning of the images gallery

By pairing an impressive flow rate of 650 CFM with a unique wall-mount design, this collector gobbles up dust at the source, without hogging up floor space. It mounts quickly and easily to the wall with a simple included Z-bracket. Plus, it's portable! Just set up additional Z-brackets (#21537, sold separately) around your shop to create dust-collection stations close to the tools you're working with. The comfortable foam-gripped handle makes transportation and setup a breeze. The motor features a sealed shaft and bearings for quiet, long lasting operation, and the inlet accepts standard 4'' hose. The collector includes a 30-micron bag with a clear window on the side so you can see whether it's full. A zipper in the bottom makes emptying a breeze. 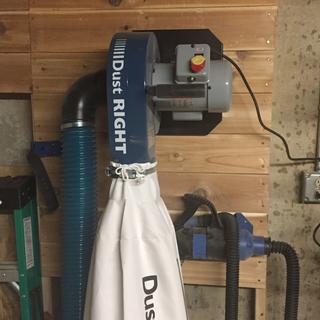 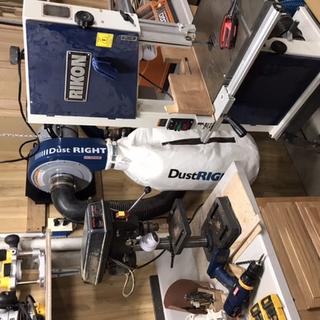 Awesome ... completes vacuum needs for other half of my shop! No more moving hoses!!
October 13, 2019
S O
Purchased
6 months ago
Nice unit
I like this collector but one thing I don’t like is it plugs up at the connection to the blower with the cross bars at the end when planing rough lumber the dust can be longer shreds coming off and it catches these bars and plugs
September 28, 2019
Wes F
Purchased
6 months ago
Woodworking Experience:
Intermediate
Excellent Dust Collector
Sturdy construction, great suction.
September 26, 2019
Mauro S
Purchased
7 months ago
Woodworking Experience:
Intermediate
Additional dust collection
I bought this instead of extending my main dust collection system. Neither option was free, but this seemed the easiest. I previously had the dust right with the bag, but sold it. This one I got with the canister filter which is well worth it. The unit is not particularly loud and does a good job with a relatively short (14") flex hose going to the machines that I use it for. I also use it with a floor sweep and it does just fine.
September 20, 2019
Red Stick Woodworks
Purchased
7 months ago
Woodworking Experience:
Intermediate
It does what its supposed to do.
I would recommend this to the garage woodworker like myself who has to move the cars in and out all the time. When I used to sweep the floor, there would always be a fine film of sawdust left over. After all the work of sweeping and stooping over with the dustpan, the floor still wasn't clean. Guess what - that's not a problem anymore! My only advice is to get the longest hose because it runs out fast when you start moving away from the motor. 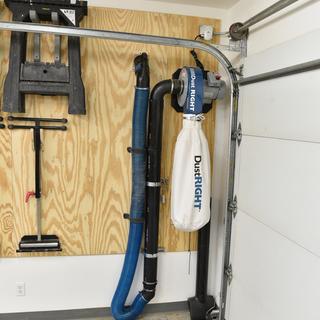 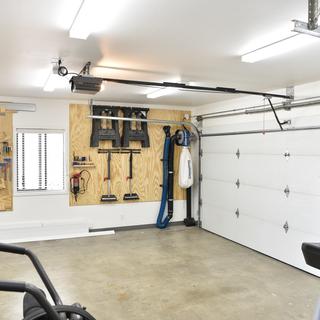 May 25, 2019
Jack D
Woodworking Experience:
Intermediate
Love how well this works, and it's convenience.
I set up my wood shop in my barn, and it did not take long to figure out I needed some way to control the dust from cutting, routing, and other wood operations. After a few hours of research on-line, I determined that the DustRight wall mount collector would be best for my situation, and ordered it, and the hoses, etc. to get started. I could not be more pleased with the results. Got it assembled and mounted on the wall in no time, and the hose reaches all of my equipment. I made a dust port for it to fit mt dovetail jig, and that was the first thing I used it with. I worked great, gathering all the dust so well that I no longer need to wear a dust mast and coveralls while routing. 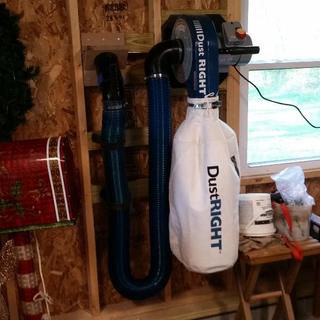 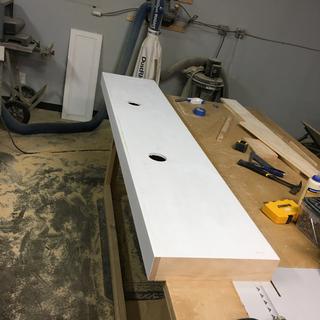 Wall hung collector
August 6, 2018
Jeff W
Purchased
1 year ago
Woodworking Experience:
Advanced
I just installed dust right system from rockler store. This is a great unit for my garage. It’s very powerful and also the noise level is minimal. If you need a dust collection system for your shop or a garage and don’t have enough room this the way to go. I would highly recommend rockler dust right. 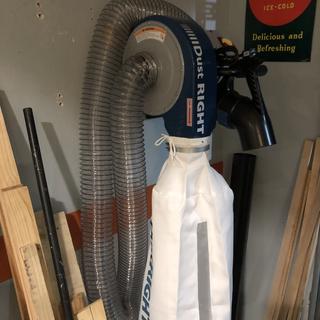 A minimum height above the floor should be specified for mounting the unit in order to keep the collection bag at a height off the floor where it can be emptied.

Is the lower Z-bracket actually required? With the stop limiter on the upper, it is unclear where to place the lower bracket.

Photos from both or all sides would be beneficial to seeing how components fit together that are not addressed in the instructions.
October 20, 2019
William H
Purchased
6 months ago
Woodworking Experience:
Intermediate
Unhealthful without canister
As a former air quality scientist I was somewhat leery of buying this with only the 30 micron filter bag. After buying it and running just a few pieces of pine the shop is filled with fine, respirable dust. I had much cleaner air with a shop vac and HEPA filter. The 5 micron bag should offer only minimal improvement in terms of protecting your lungs as respirable dust is generally considered to be as small as 0.5 microns. If your are using this to capture relatively big dust only you would probably be OK but your lungs will NOT be protected without the very expensive and optional 1 micron canister.
December 30, 2018
Bobmaine
Woodworking Experience:
Advanced
Disappointing
While the setup was very easy I'm disappointed overall. Very little suction even after closing all blast gates. My Shop Vac does a better job.
March 5, 2020
Joe W
Purchased
2 months ago
Woodworking Experience:
Intermediate
Marginal Power
I waited until I had used my 12 1/2 inch planer and 6 inch jointer before submitting my review of this tool. I used a 20 gallon Craftsman shop vac for years and believed I was upgrading when I purchased this. What I found was a woefully inadequate system that didn't have the power to clear the machines I specifically purchased it for. It also has a hard time picking up and securing small chips. Most stay in the hose and don't make it to the vacuum bag. It does fine with dust.
I'm going back to my shop vac for shavings and chips and get a more powerful system when I can afford it. As I said, a very disappointing purchase.
February 15, 2020
Mark G
Purchased
3 months ago
Woodworking Experience:
Intermediate
DustRight 650CFM Wall mount
Not enough suction power for my Jet 10" bench saw, nor the Jet 6" joiner, nor the Ryobi 1301 planer. Tended to clog at input of the unit which caused chips & dust to fly at each machine. Does work well with the smaller power tools.
January 28, 2020
Timothy S
Purchased
3 months ago
Woodworking Experience:
Advanced
Dust Right Wall-Mount Dust Collector 650 CFM
When I opened the box I noticed the styrofoam protection was pushed down. I removed the collector from the box and found the motor guard and motor fan bent toward the motor. Because I had already waited 24 days for the collector, I straightened both the guard and the fan. It appears it is working O.K. I have purchased a lot of Rockler products and have always found them to be well made. I hope this is a one time problem.
March 30, 2020
David F
Purchased
1 month ago
Woodworking Experience:
Advanced
Don't waste your money
I purchased one of these two years ago. It spewed fine dust particles through the bag filter, so I bought the air filter. It also plugged up easily when used with my jointer or planer, so I bought a separator (which I do recommend) Unfortunately the separator works best immediately after the tool. When you try to use it just before the fan, you still get plugs in the hoses and piping. While waiting for a couple parts, I connected the separator to my shop vac.Mine is the 14 gallon model. WOW! WHAT A DIFFERENCE! The shop vac has much more suction. My advice is to use the separator with the shop vac, and move it from tool to tool.They make one with about double the CFM, but the shop vac is cheaper. The shop vac has a HEPA filter bag, which is relatively expensive but with the separator, the bag is only collecting the fine particles. The separator collects the large ones, so it isn't too bad for operating cost.
February 16, 2020
Sully
Woodworking Experience:
Advanced
No Show
I would of liked it a whole lot better if they would of sent it. Waited three weeks on it then I cancelled order.
February 8, 2020
Phil C
Purchased
2 months ago
Woodworking Experience:
Intermediate
Too little suction
I purchased this for my small shop but have been very disappointed. It has so little suction that it can barely pickup dust. My $25. Shop vac works better than this does. I wish I had returned it immediately and bought something better.
December 29, 2019
Stephen B
Customer Service No Response
I purchased this 4" premium hose and a dust collector. Though the hose would work with the box full of Rockler Dust Collection fittings I have accumulated over years. It didn't. It was too small to force onto the fittings. Not with very hot water or a heat shrink hot air gun. Only with the greatest effort did I get it to attach to the metal input flange on the collector.
Told customer service this and they simply blew me off... Hence the expensive dust collector I purchased with the hose doesn't work either. First time Rockler has failed to do a good job... must have new management...
October 9, 2019
Mike
Purchased
6 months ago
Woodworking Experience:
Advanced

Powered by TurnTo
Questions that need answers | My Posts
Start typing your question and we'll check if it was already asked and answered. Learn More
Do not include HTML, links, references to other stores, pricing or contact info.
My question is about:

If your question is about more than one item, click + to add them.

The jet 1 1/2hp vortex dust collector with cost about the same as the Rockwell with the optional cannister, but will be MUCH more powerful and a little quieter. I sold this jet to get the wall mounted collector, which I now regret.
0
BEST ANSWER: It's not as loud, but has a lower "tone", like comparing an alto singer to a soprano.
Also, I would recommend something with more power. This one is enough for a single tablesaw, bandsaw, etc, on a short run of hose. Had it been available, then I would have bought the stronger model now on sale.

WARNING: Drilling, sawing, sanding or machining wood products can expose you to wood dust, a substance known to the State of California to cause cancer. Avoid inhaling wood dust or use a dust mask or other safeguards for personal protection. For more information go to www.P65Warnings.ca.gov/wood.
Related Products
Related Articles
More Suggestions